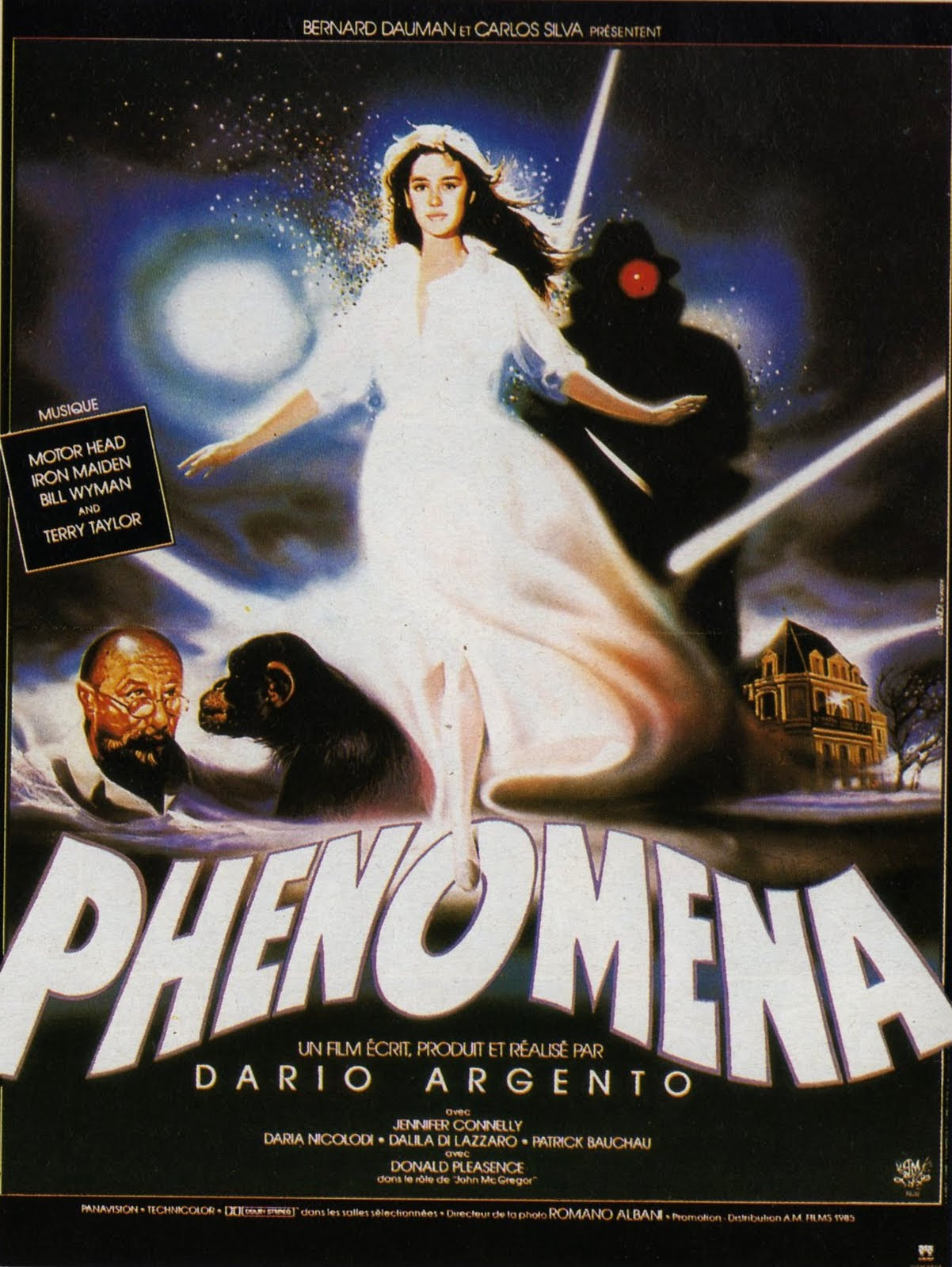 Argento is a name even the non-Italian horror fan knows, primarily due to the tremendous success of Deep Red and Susperia had amongst english speaking fans. Argento pushed the Italian slasher genre known as Giallo to surreal heights in the late 1970s and early 1980s and was noted for his strange lighting, thumping soundtracks and often nightmarish sequences set amongst stunning Italian architecture.
Phenomena is one of his works from the mid 1980s, after his peak and well and truly a child of the VHS age. It stars a 15year old Jennifer Connolly (just before Labyrinth) as well as Donald Pleasence in a post Halloween outing. It was released in the US as "Creepers" and follows the time old story of girl with psychic ability to communicate with Insects (Jennifer Connolly, also playing a character called Jennifer) is sent to a boarding in school in Switzerland where a serial murderer has run amuck.

The story follows our main character through her first experiences at a boarding school that seems to be at the center of a nest of secrets. The film opens however with a backpacker separated from her bus coming across a strange house and meeting her demise before shifting over to Jennifer getting settled in at the Academy.
After witnessing the death of another student whilst she is sleepwalking Jennifer falls from a balcony into the woods and meets the Chimpanzee nurse of a paraplegic entomologist John Macgregor (Pleasence) who leads her to the professor's home. Macgregor has been consulting with the police over the discovery of the head of the backpacker from the start of the film; determining time of death by the species of maggots found hatches in the flesh. Jennifer shares with the doctor her love of insects and the peculiar effect she has on them.

Phenomena feels like a lot of Argento's previous works and in many ways is a greatest hits compilation of his most notable cinematic concepts assembled in one package. That's not to say it isn't enjoyable, it has some great moments and tension throughout. It is less surreal than the films that proceed it but it still is blessed with some imagery that could come from few places other than Argento. (Chimpanzee nurse with an obsession for walking around with a Kitchen knife springs to mind)But yes the Boarding school, lone girl away from home, brutal killer, kitchen knives, strange subterranean lairs; all classic Argento. The colour pallet is a little more subdued than usual, dominated by greens and browns rather than the lurid colours he is famous for, as well as lots of light filtered through clouds or curtains. The only reoccurring element in his films missing is Asia Argento, but her mother is in the film so does that count as a missing element? It's sound track is also full of Goblin tracks, as well as tracks from Motorhead and Iron Maiden, giving the sound a suitably "Argento" feel.

Like all of Argento's films it begins with a brutal murder and in true Giallo tradition the killings become more and more bizarre and frenzied as the film goes on. Argento also does not disappoint with the horror imagery, from severed heads to insect swarms and pits full of corpses; they are still done effectively unlike his more recent works.  (Which seem to degenerate into dull digital gorefests, also known as DDGs by no one other than me.) It has a great emotive impact and at no point does it feel the need to explain it's bizarre or macabre elements which so often drags down modern films. It is not as effective or original as Argento's classics, it is still a great horror flick for those of you who have watched his other works and are looking for something new.

This review was part of the Italian Horror Blogathon over at  Hugo Stiglitz makes movies. Go over there and see all the other great (and not so great but fun) films being reviewed over there!
Posted by fruityb at 2:30 PM